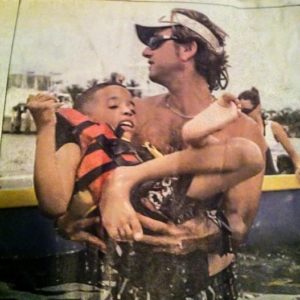 My grandson, Christopher, was a normal kid. He was born normal, and then at the age of six, one day he came home to my house. He was playing outside, and he walked up to me and said he had something in his hand. I squeezed his hands and noticed something was wrong. And he went to the doctor. His body started to cripple up. All his limbs became like a pretzel. We went all over to doctors in Miami and everywhere. None of the doctors have seen anything like it before.

Then my boss sent us to Boston and they diagnosed it as Distonia. Then we went to Gainesville and the doctors gave him up to 25% chance that he would improve. Then after prayer to the precious blood of Jesus, my Jesus gave him a 100% chance of recovery. The doctors then did a surgery. The next day Christopher’s hands were opened. That was amazing since they were always shut tight. Then the doctor called Christopher a miracle since they have never seen a boy recover completely like he did. They didn’t even want to put him through therapy since they thought it would be fruitless, and would be too much for him. The therapy ladies told me just leave him alone. His body will never be strait again….and look at him now. After he recovered he saw that same therapy lady and she couldn’t believe it. His recovery happened in just a couple of days after the surgery and Jesus did it.