When I was 12 years old my grandmother came to live with us. Her name was Jenny and my name is Jenine so I was named after her. I just adored her; she was a very cool grandma. That August she came to live with us, and she had a heart attack in the house. With all the confusion and calling the ambulance, I just stood in front of her bed screaming, “You can’t die on me, and I need you!” Then, she was whisked away and spent a week in the hospital.

That October, and while we were sitting in the kitchen, she said to me, “I have something I really need to tell you.” Being 12, I said, “OK”. She said that her husband, my grandfather, who I have never met, Michael, died 17 years ago, Friday, on Christmas day, and that while she was having the heart attack, she had drifted through a tunnel to a light and saw her husband, Michael. So she began to tell me, at the kitchen table, that she was leaving on Christmas day because it is falling on Friday and he is waiting for me. 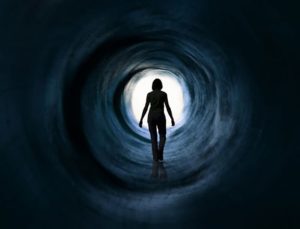 I wasn’t going to argue with her. I just said, “OK, grandma”. Well Christmas day rolls around, and she was with my aunt. Then we get a phone call at 5:25pm saying that she was rushed to the hospital and took off all of her rings and said, “Have a wonderful Christmas.” and then she passed away.

And at this point people say, “Well, you really became a believer”. No. Actually, I started a war with God because I was heartbroken since I really, really loved her. For the next 14 years, if you talked about God, I told you how heartbroken I was, and that I didn’t believe.

Then I gave birth to my second child. My hospital would always do a chest x-ray after you gave birth. Therefore, they did a chest x-ray and asked me if I have ever had pneumonia. I said, “no, but I do get very bad upper respiratory infections.” They said, “well, you have some scaring on your lungs, and we will keep an eye on it.” Two years later, I give birth to my third child. They literally rip him out of my arms and say to me, “we don’t know what you have, but it is over both of your lungs”. Shockingly, I went from giving birth to a trans bronco biopsy. It ended up that I had a disease called Sarcoidosis. They don’t know where it comes from, but it is an autoimmune disease.

I became symptomatic. For the next three and a half years, with three babies at home, I could barely breathe. So life was truly, truly a struggle. I was going to Mount Saini to the Annenberg Pavilion (that is where they have a Sarcoid clinic) to be put on massive doses of Prednisone for nine months. I stop in the parking lot and I looked up and said, “Please God, if you are there, could you just help me.” And I walked into the clinic, and since I had had a biopsy, they track the disease by x-ray. The doctor took my new x-ray and put it into the fluoroscope. He snapped it back and put it back in again, and said, “Mrs. Olivary, I have never seen this before. I have been Sarcoid specialists for 20 years, and your Sarcoidosis is completely gone. “ I said, “What!” He said “More importantly, it is amazing, the fact that all of your disease is gone from your lungs but also all of the scar tissue on your lungs is completely gone.” And I said to him, “I don’t even know what you are telling me.” He said, “If I gave this x-ray to my x-ray technician, he would tell me that these are perfect healthy pink lungs that have never been infected by any disease.” And he said, “That is impossible.”

I just walked out, not really understanding it. I stood in the same parking lot where I asked help from God, and I looked up and said, “Oh, my…you are real!” And my second thought was, “oh my gosh, Grandma Jenny, you really are in Heaven.” The things my grandma told me: heaven is for real, Michael is waiting, and I am leaving.

So from that point on, God had my undivided attention. I want to say, if you are looking for intrigue, suspense, and supernatural, hang with God. It doesn’t get better.