Everything in Ashes…Except the Bible

While attending Catholic Heart Work Camp (a summer volunteer community improvement program), I was with a large group of volunteer teens in a shelter for homeless women and their children. We were painting inside when there was a commotion going on outside, and everyone went outdoors to see what was happening. Upon arriving on the front porch, we saw a car on fire across the drive way in the grass a few feet from the shelter. 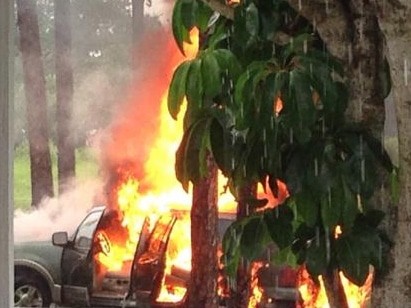 The fire started at the bottom of the car where the gas tank was. One of the leaders of the teens tried to put the fire out, with a fire extinguisher, but the fire wound up exploding in his face. Fortunately, he was unharmed. As the minutes went buy, the fire engulfed the car. It just kept on getting higher and higher, many feet above the car. Then all the tires popped which sounded like bombs going off. Finally the fire fighters arrived. They started putting out the fire which took about an hour since it was a gas fire. The car, which belonged to a local Melbourne volunteer youth group leader, was just happy everyone got out of his car safely since there were 5 kids in the car at the time it caught fire. Apparently, they ran over a shovel which punctured the gas tank that started the fire. Sadly, all the stuff (cell phones, tools, etc.) which belonged to the passengers of the car was completely destroyed. After the fire fighters had left, we went over to the car, and it was just torched. Everything was black. After scouring the car looking for the charred/drenched belongings, someone noticed there was a Bible in the car. Amazingly, that was the only thing that wasn’t scorched or saturated. When they opened the Bible, the pages were totally white and perfect. Just the edges had a little bit of black. It was fantastic, and that was our Bible miracle.