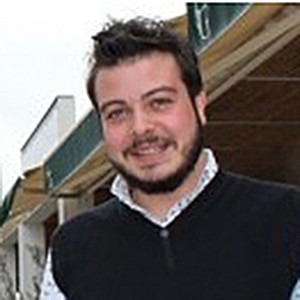 Unbearable pain and a paralyzed life in a wheelchair are among the consequences of Perthes, a rare disease that leads the femoral head and hip to flake. 21 years old Andrea de Luca from Castellammare di Stabia, Italy, lived this condition for three years until he was cured in Medjugorje.

The doctors who were treating him, Dr. Anastasio Tricarico, a professor of orthopedics and traumatology at the University of Naples, and Dr. Pasquale Guida, an expert of orthopedics from Naples, testify to Andrea de Luca’s inexplicable healing. In Italian author/journalist Paolo Brosio’s new book, “Ray of Light”, they further present before and after x-rays showing the restoration of bones that had been broken and missing.
Andrea de Luca’s healing began with a garden statue of the Virgin Mary lighting up

“One day, a young man greeted me: ‘Hello professor” while he was riding a bicycle. I could not believe it was Andrea, whose disease I had followed for three years” Dr. Pasquale Guida told the Italian tv station RAI.

In September 2009 Andrea de Luca and his parents went to Medjugorje. It was the last hope they had for a cure. The first sign came one evening as he had gone into the garden of the place they were living.

“I could not sleep. I went out into the yard, made the Sign of the Cross, and began to pray. Then the head of Our Lady’s statue before me lit up. Although it was a beautiful light, one you cannot describe, I got scared and went back inside. I invited my parents to come and see. When they arrived, two beams came out of the statue, one from the heart, the other from the leg” Andrea de Luca tells the Croatian daily 24 sata.

“Then one day, a nun told me: ‘Talk to Jesus. Talk. Tell Him to take away your disease.” The following day I went to Mass and prayed for the first time myself. I felt a heat in my entire back” says De Luca, 16 years old by the time.

Because of fear, he would not put his crutches away. That he only did when he returned to Italy.
andrea de luca medjugorje

“When we returned home, I waited with my crutches in order to get out of the bus. Then three times I heard a voice in my heart saying, ‘You are my apostle. Walk and wear my light’. From that moment ceased the very big pain that I had felt for three years” says Andrea de Luca.

He was silent in public for almost five years before he started telling what had happened to him.

“I did not want to talk about it then. I was a child. Now I am an adult, and the doctors have confirmed that a miracle happened in my case” he says.