Jesus Raised My Son From the Dead 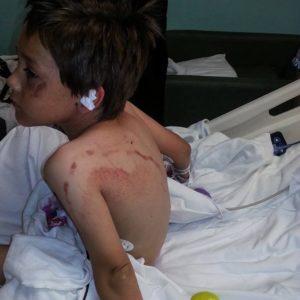 Jesus Raised My Son from the Dead

On Friday 4/18/14, my family was celebrating Good Friday­­—the day Jesus died on the cross—by participating in the presentation of the Stations of the Cross at St. Juliana’s Catholic Church. Our family processed around the neighborhood with the St. Julianna community praying and contemplating the passion and death of Jesus. Students of St. Juliana’s School imitated the passion by carrying the cross of Jesus and reenacting each station of Jesus’ death. A truck pulled a trailer that was about 15 feet long carrying audio equipment and approximately twenty people who were singing during the procession.  My son, John, who was six, loved being at the front of the procession with all the participants of the passion. I lost sight of my son many times during the promenade in the thick crowd of people. I had to constantly try to keep up with him since he wanted to be part of the performance. At one point, he got lost in the crowd and became very far ahead of us. I wasn’t too concerned about him since it was a church event…he was around good people, and police were everywhere. Never did I think he could become injured or die.

Towards the end of the procession, my daughter addressed me about how she was worried about John, not wanting to ignore her concerns, we looked for him. About twenty feet away, I saw him walking beside the trailer right in front of the wheels. Then literally the next second, the trailer’s wheels began to swallow him up. The wheel caught his tiny feet and began to roll on top of his entire body as everyone watched in horror. His helpless body fell forward right into the path of the wheels. I ran, and cried out to God, in shock, “No, Lord Jesus….not my John John”.

As I ran to John to try to stop the trailer from continuing to crush him, my daughter, Kathrine, who was sixteen, ran to the truck driver to get the trailer to stop. Praise God, it stopped right before my son’s head was crushed too. However, the heavy trailer rolled backwards and finally stopped on top of my son’s delicate back right above his heart. So I tried with all my might to lift the trailer off of him. Of course, I couldn’t budge it. Fortunately, many others saw the horrifying event and ran to help lift the trailer off of my youngest child.  Finally, the trailer was lifted off of him and someone pulled him free.

At that moment, I looked at my son with a sense of relief that he was free, and a sense of terror that he was seriously hurt. Shockingly, when I looked at his face, I saw a lifeless boy. He was purple, expressionless, and looked dead. That look I will never forget, his life was no longer. It appeared as if my wonderful joy was gone. Knowing there was nothing more I could do for him, I immediately fell to my knees and prayed (as I’m sure others did too) with all my heart crying out to Jesus, “Lord, please, if it is your will, let my baby live.“

The next second, I got up and ran to my son, who was moved into the grass, and laid there lifeless. I knelt down next to him, looked at his little precious body and upon me saying his name, “John,” he opened his eyes and spoke. Praise God! However, he told me he couldn’t see. The capillaries in his face and upper body exploded, and his eyes were blood red too. I calmly spoke to him hoping to bring him comfort and keep him still and I prayed, “Lord, if you want me to take care of a blind boy, that is fine but if you will it, can you please heal him completely.” While all this was happening, my daughter called 911. She remembered an article she read that said if an emergency happens in a public place and people are screaming “Call 911!” everybody assumes that somebody else already did it. So my daughter, Kathrine, ran down to the street sign to give the 911 dispatcher the coordinates of where we were and they dispatched help. Fortunately, the paramedics came very quickly. I was only able to say a few prayers and some words to my son and fire rescue was there.

Before we were whisked away to the Trauma Center at St. Mary’s Hospital, I ran over to my other daughter, Marie, who was fourteen, and crying profusely. I believe she still thought he was still dead since nobody allowed my other children near their brother. I grabbed her by both of her shoulders, looked her in the eyes and told her with all certainty, “Do you believe in God?  THIS IS HIS WILL…Trust in Him and Pray for John.” She gave me a look as if I was crazy…how could this be God’s will?

Then, I hopped in the back of the ambulance and we drove away. My son was complaining about his foot hurting, but said, “I’m fine. I don’t want to go to the hospital” which was nice to hear and age appropriate. One of the paramedics asked my son to grip his hand, John replied, “How can I do that when I don’t even feel your hand?” At that moment, I prayed to Jesus and said, “Lord, if you wish for me to take care of a paralyzed son, I’m ok with that. I will do whatever you want, but please, if it is your will, heal him completely.” I continued to pray with my son, even though he wasn’t into it. We prayed the Our Father & the Hail Mary (asking Jesus’ Mother to pray for John) countless times.

When we arrived at the hospital, the nurse wouldn’t allow me to go into the trauma unit with my son where several surgeons and medical staff were all lined up to operate on him, even though, by God’s grace, I was perfectly calm and composed and didn’t shed a tear through the whole event.  Therefore, I knelt in the waiting room and prayed for my son’s recovery. After the hospital ran many many tests (checking all his organs for internal bleeding, broken bones, hemorrhaging, brain/spinal damage, etc.) almost every test came back negative. The doctor told me they couldn’t find anything wrong with him except that his right lung was bruised and his right ankle was broken (yet, strangely, the following day they recanted that and said it wasn’t broken). We stayed in the hospital the next day for observation, and my son was hooked up to many monitoring apparatuses. Since he had discharge from his ear, he went back for an additional cat scan because discharge is frequented for people who have suffered from a concussion, yet that test was negative too. After my son received one nebulizer treatment for his bruised lung, that was healed as well. Soon, he was laughing, playing video games, and hobbling around (they did put a cast on his other hurt foot which he wore for a week). We were discharged on Easter Sunday afternoon.

So after, my six year old son’s entire body was crushed from toe to neck, not a bone was broken or displaced…nor was there any major injury.  Later that afternoon after Easter dinner at Grandmas, John was singing in the car, like six year olds do, because I had told him, to his surprise, the accident  had squished his poop out of him. John thought that was funny. So he sang a song “It squished the poop out of me.” My husband, looking upset, asked John to not sing that. I asked my husband why he found it so disturbing. My husband, who is a doctor, told me at the moment of death, all the muscles in the body relax, including the rectal and urinary muscles, which explains why my son unknowingly urinated and defecated during the accident.  That also just confirms what an amazing Easter Miracle we had! Just like Jesus’ death, God planned every minute of the event for Our Lord’s Honor and Glory to be shown. Right before the accident happened, my son was practically touching the people sitting in the trailer and many others were within feet of him too. However, nobody saw him in danger. God allowed everyone to be blind so that this incredible miracle could occur. God is still raising people from the dead, and His Endless Mercy is with us. Trust in Him.

God gives us trials to teach us His blessed ways, to help us grow in greater trust, and to prove our faith in Him. What we call “pain” is really a gift from Him. Ever so often, we don’t understand why God allows, what seems to be, a horrific tragedy to occur. But I can tell you, even after having two of my other children die (in the womb, which are happy in Heaven), I know they are God’s way of drawing us closer to Him, if we can see His love. Sometimes, it takes tragedy for us to find the Lord and trust in Him. But praise God for those who find true faith and trust in Jesus without such tragedies. I can tell you, my doubting daughter will probably not doubt The Lord’s will again. Because a life without trusting Jesus, is really no life at all.