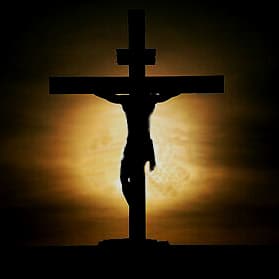 At seven o’clock in the evening on August 18, 1996, Fr. Alejandro Pezet was saying Holy Mass at a Catholic church in the commercial center of Buenos Aires. As he was finishing distributing Holy Communion, a woman came up to tell him that she had found a discarded host on a candle holder at the back of the church. On going to the spot indicated, Fr. Alejandro saw the defiled Host. Since he was unable to consume it, he placed it in a container of water (for it to dissolve) and put it away in the tabernacle of the chapel of the Blessed Sacrament.

On Monday, August 26, upon opening the tabernacle, he saw to his amazement that the Host had turned into a bloody substance. He informed Cardinal Jorge Bergoglio, who gave instructions that the Host be professionally photographed. The photos were taken on September 6. They clearly show that the Host, which had become a fragment of bloodied flesh, had grown significantly in size. For several years the Host remained in the tabernacle, the whole affair being kept a strict secret. Since the Host suffered no visible decomposition, Cardinal Bergoglio decided to have it scientifically analyzed.

On October 5, 1999, in the presence of the Cardinal’s representatives, Dr. Castanon took a sample of the bloody fragment and sent it to United States for analysis. Since he did not wish to prejudice the study, he purposely did not inform the team of scientists of its provenance. One of these scientists was Dr. Frederic Zugiba, the well-known cardiologist and forensic pathologist. He determined that the analyzed substance was real flesh and blood containing human DNA. Zugiba testified that, “the analyzed material is a fragment of the heart muscle found in the wall of the left ventricle close to the valves. This muscle is responsible for the contraction of the heart. It should be borne in mind that the left cardiac ventricle pumps blood to all parts of the body. The heart muscle is in an inflammatory condition and contains a large number of white blood cells. This indicates that the heart was alive at the time the sample was taken. It is my contention that the heart was alive, since white blood cells die outside a living organism. They require a living organism to sustain them. Thus, their presence indicates that the heart was alive when the sample was taken. What is more, these white blood cells had penetrated the tissue, which further indicates that the heart had been under severe stress, as if the owner had been beaten severely about the chest.” The blood type is AB + , and the DNA is from a man from the Middle East. This DNA was compared to a similar Eucharistic Miracle in Lanciano from the 8th century, and the DNA is from the same person.

Watch this video of Dr. Ricardo Castanon’s talk till the end. He is a renowned scientist, former atheist, Catholic convert, and author of the book Cuando La Palabra Hiere (When the Word Hurts). He travels the world investigating Catholic mystical phenomena and runs scientific tests to prove or disprove them. His mission began when he decided to disprove one miracle, and ended up a strong believer. He is the president and researcher of the International Group for Peace and, in the video below, is speaking at the 2008 Faith and Science Conference about his scientific investigation of a Eucharistic miracle in Buenos Aires.

Witnesses of the studies were the attorney Ron Tesoriero and Mike Willesee, one of Australia’s best known journalists, then converted to the Catholic faith. As Zugibe later learned that one sample a month the others were stored in distilled water even for three years, he was completely taken aback. He was even more surprised when he learned of the origin of the samples from wafers. The “living” part of it is a male heart fragment came from a piece of consecrated bread. Zugibe was stunned: How could the fragment of a piece of bread be a part of a human heart? How was it possible that these samples he examined, which must have been taken from 1996, for those who do not believe in miracles, could be from a dead man, still remain “alive” years after removal, meaning that the tissue cells were active and moving? Within 15 minutes, the white blood cells break down in a dead organism. How was it possible it was still observable in 2005? Zugibe’s response, “How and why can the consecrated Host mutate and become the flesh and blood of a living human being, remains an inexplicable mystery for science, a mystery that lies outside its competence.”