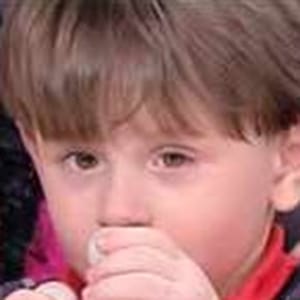 For eight months, 2 years old Joshua battled a last stage cancer with a transplantation, 80 chemotherapy cures, and 17 radiotherapy sessions. When nothing worked, his parents took their son to Medjugorje. Back home, tests showed 19 tumors and all bone metastases to be gone as the beginning of Joshua’s now complete recovery.
elizabeth joshua de nicolo healed medjugorje

Before he turned three years old, Joshua de Nicolo had experienced more hardships, drama, and obvious grace than many people do in an entire life.

The boy from Putignano in southern Italy was born with an un-discovered neuroblastoma, the most common form of infancy cancer, in February 2007. It took 22 months for Joshua’s true condition to be found in January 2009 when the illness had progressed to its last stage, 4D, where long-term survival rates are poor despite aggressive multimodal therapy.

Doctors gave Joshua only days or weeks to live when his parents took him to Medjugorje in June 2009. Just before departure, the boy’s white blood cell numbers dramatically improved, and Joshua immediately felt well in Medjugorje, his parents testify. Joshua felt even better after Mirjana Dragicevic-Soldo’s apparition on July 2nd 2009 when he was placed beside the visionary. After that, he seemed relieved from pain.

Upon the family’s return to Italy, clinical tests showed that Joshua’s bone metastases as well as 19 tumors spread throughout the body had disappeared. The only remaining tumor had been reduced in size from 7,5 to 3 centimeters, enabling doctors remove it altogether. Since this operation took place, in November 2009, Joshua has been completely healed.

Most ever since Joshua’s parents, Elizabeth and Manuel de Nicolo, have witnessed of their son’s illness and healing.
Joshua de Nicolo healed cancer Medjugorje mother Elizabeth

Joshua with his mother

Joshua was born with one eye half closed, and his head tilting to the left. Several doctors told the couple it was nothing serious, Elizabeth de Nicolo testified to an article carried by the Italian blog Quotidinamente. Likewise, the boy was initially mis-diagnosed when a ball no bigger than a kernel appeared on Joshua’s left temple where doctors saw it and judged it non-malignant.

It was not, and it was far from, it showed when Elizabeth and Manuel took their son for more thorough tests at the hosptal in San Giovanni Retondo, by the shrine of Saint Padre Pio.
manuel de nicolo joshua healing medjugorje

“After the CT scan, the primary oncologist Dr. Xavier Ladogana told us that Joshua was suffering from mediastinal neuroblastoma in the fourth stage D, and that the tumor was attached to the pelvic bone, the bone marrow, the bones of the skull, the back of the left eye, and the lymph nodes of the neck, penetrating the left side of the brain, and that this, unfortunately, explained Joshua’s head tilt since birth” Elizabeth de Nicolo tells.

A total of 22 tumors were found, according to her husband’s testimony.

“Nonetheless, the doctors gave our son little hope of survival. It seemed to be a matter of weeks or maybe days” Manuel de Nicolo remembers.
san giovanni hospital

The hospital in San Giovanni Rotondo where Joshua was diagnosed. It was built by Saint Padre Pio who himself named it The Home of the Relief of Suffering

Cultural Christians in search of a hope

While none of the parents were practicing Christians, it was in this direction they looked when little hope was left in June 2009. The couple say they felt directed all the way to Medjugorje, and beyond. On their way, they perceived to experience several signs.

“In the blackest desperation, we thought of bringing Joshua to Lourdes. It was the only Marian shrine I knew. But one day while we were in San Giovanni Rotondo, in a moment of desperation, I went into the crypt of Padre Pio and asked him straight to his face: “Why my child? Give me a sign to restore my hope” Manuel de Nicolo tells.

“Then I went back to the hospital and as I walked down the corridor of the ward, I suddenly saw an open computer with the Madonna’s face as background image. It was like a flash that deeply troubled me. When I entered the room, I found Elizabeth who told me that Joshua had not wanted to sleep, but had found serenity and calm with some Marian songs, and had fallen asleep.”

“They were songs dedicated to Our Lady of Medjugorje.”

Prior to June 2009, Elizabeth and Manuel de Nicolo had never heard about the Virgin Mary’s apparitions in Medjugorje.

“We did not even know of the existence of a village called Medjugorje. But Our Lady called us there and we immediately received another sign. Among the magazines scattered in hospital waiting room, there was a special edition of the magazine Oggi, about the Virgin appearing to six local people since 1981, and miracles of healing. After reading this article, we decided to leave immediately” Joshua’s father testifies.

But Joshua was weak, and obstacle seemed to come on top of obstacle:

“The doctors advised us against this trip because Joshua had very low white blood cell numbers, about 5,000, but we were very determined. And on the day we left, our son’s blood cell number went up to 160,000″ Manuel de Nicolo further says.

“Already in this, I saw the first miracle. The child could not face the journey in these conditions. But the rise of his white blood cell numbers in a very short time was a first sign” Elizabeth de Nicolo said live on major Italian tv channel RaiUno on February 28th 2010.
blue cross medjugorje

In front of the Madonna

From early on, Joshua felt well in Medjugorje. His parents noted a difference almost from the moment he first set foot in the village:

“Once in Medjugorje, we only just got off the bus when Joshua seemed to be mysteriously, but strongly attracted to this holy place. As a result of the tumors, the child could hardly walk anymore. But he seemed to get better” Manuel de Nicolo has testified.

Meeting the converted Italian journalist and tv personality Paolo Brosio paved the way for Joshua to be placed next to the visionary, right in front of the Virgin Mary, during Mirjana Dragicevic-Soldo’s apparition on July 2.

“After the apparition, to our surprise, Joshua began to feel even better, and he did not seem to experience pain anymore” the father tells.

“But we had the biggest suprise when we came home.”
joshua de nicolo healed medjugorje cancer

Joshua upon his healing, still bald after intensive chemotherapy

Elizabeth and Manuel de Nicolo returned the hospital at San Giovanni Rotondo, finding doctors who could not explain what they saw:

“The clinical tests underlined the fact that 19 tumors spread throughout the body had disappeared, and the bone metastases were completely healed. Only behind the lung, a neuroblastoma had remained but the size of the tumor had been reduced from 7,5 to 3 centimeters” Manuel de Nicolo tells.

“The doctor told us that Joshua “was miraculously healed”. And Dr. Xavier Ladogana, the director of the oncological department, went further: “What happened to your child is scientifically inexplicable. With the resources and knowledge we have at our disposal, we cannot give an accurate and incontestable medical explanation. We can only say that the child no longer has the same disease he had before the pilgrimage” Elizabeth de Nicolo quotes the doctors to have told the couple.
joshua de nicolo healed child cancer medjugorje

Joshua de Nicolo during one of his tv appearances. The boy and his parents have appeared on a handful of major Italian tv channels: RAI 1, RAI 3, Channel 5, and Rete 4

The decrease in size of Joshua’s last remaining tumor allowed doctors to operate it. This took place on November 17th 2009:

“The surgery was fully successful and the doctors even said that this was, in a sense, itself a miracle because it was so inexplicable: The operation lasted less than one hour and was expected to last four to six hours” Manuel de Nicolo tells.

“After the surgery the child had to spend several days in intensive care, and actually spent less than half an hour because he woke up immediately and began to breathe without problems, far beyond the most optimistic forecasts. For us, this intervention was a second miracle.”
saint padre pio

Saint Padre Pio prophecied Medjugorje in 1968, telling pilgrims from Bosnia and Hercegovina that “soon, the Madonna will visit your country.” The Capuchin priest had apparitions himself and further had the gift of bilocation and the ability to read people’s souls. Joshua’s parents considers the saint to watch over their child

“Upon awakening from the operation, he told me that he had been in Heaven with Jesus, and that he had received a big, great gift, the gift of life” Elizabeth de Nicolo has testified.

One year after their first visit, the family returned to Medjugorje to give thanks. For Joshua, that meant one more unusual experience:

“After twelve months, we returned with a cured child” Elizabeth de Nicolo tells.

“There I saw Joshua lift up his eyes and smile. I knew something special was taking place. When I asked him why he smiled and looked at the sky and said “Have a peaceful and joyful Christmas”, he told me he was seeing the Madonna and beside her was Padre Pio who was smiling at him.”

“We are sure that the saint of Pietrelcina is the guardian angel of our son who protected him from the beginning of this ordeal, and will continue to watch over him forever. ”