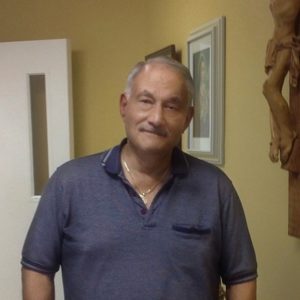 When my husband, Phil, and I were first married, my husband became very very ill. They couldn’t find the diagnosis because this occurred about 39 years ago and technology wasn’t as advanced as it is now. But my husband had this horrific pain, and after much deliberation from one hospital to another, the doctors put him into Albert Einstein Hospital in the Bronx. They gave him a laparotomy which is an exploratory surgical procedure involving a large incision through the abdominal wall to gain access into the abdominal cavity to hopefully discover what was is wrong.

When the doctor came out from the surgery, he said, “Well, at least it is not cancer.” However, they still didn’t know what was wrong with him. Nonetheless, after he came out of the operation he had tubes in him, and he couldn’t breathe very well. They kept on working with him but they couldn’t get him to feel any better. After being with him for the day, I decided to leave and go home and then I received a phone call from the hospital saying to come back they didn’t know what was going on but it looked like he was going to die.

I hurried back to the hospital and took out my rosaries and prayed and prayed, and around 6:00am a doctor came in, and I thought to myself, “how strange…he is wearing plaid and stripes together. It is all mismatched.” But anyway, I saw my husband’s chart in his hands; he didn’t say a word to me or my husband who was burning up with a fever, and then the doctor pulled out the tubing and left, and within 15 mins. my husband was all better.

Next, the nurse came in and she started yelling at me, “Mrs. Sculski, why why what did you do?” I replied, “I don’t know what you are talking about, I didn’t do anything.” She said, “but you removed your husband’s tubes.” “I didn’t do that!”, I exclaimed. “The doctor was here.” The nurse responded, “There was no doctor here.” I said, “don’t tell me that ; he had my husband’s chart in his hand.” The nurse then went on to say, “I have been sitting at my desk right next to his room with the chart right next to me. It wasn’t possible for any doctor to get his chart and into his room without being scene.”

To make a long story short, My husband from then on has been perfectly fine. Now I know for sure that was an angel from God because he never gave us a bill.